This algorithm takes as input a path (or loop/network of paths) along the edges of a triangle mesh, and as output straightens that path to be a geodesic (i.e. a straight line, or equivalently a locally-shortest path along a surface). The procedure runs in milliseconds, is quite robust, comes with a strong guarantee that no new crossings will be created in the path, and as an added benefit also generates a triangulation on the surface which conforms to the geodesic. Additionally, it even enables the construction of Bézier curves on a surface. 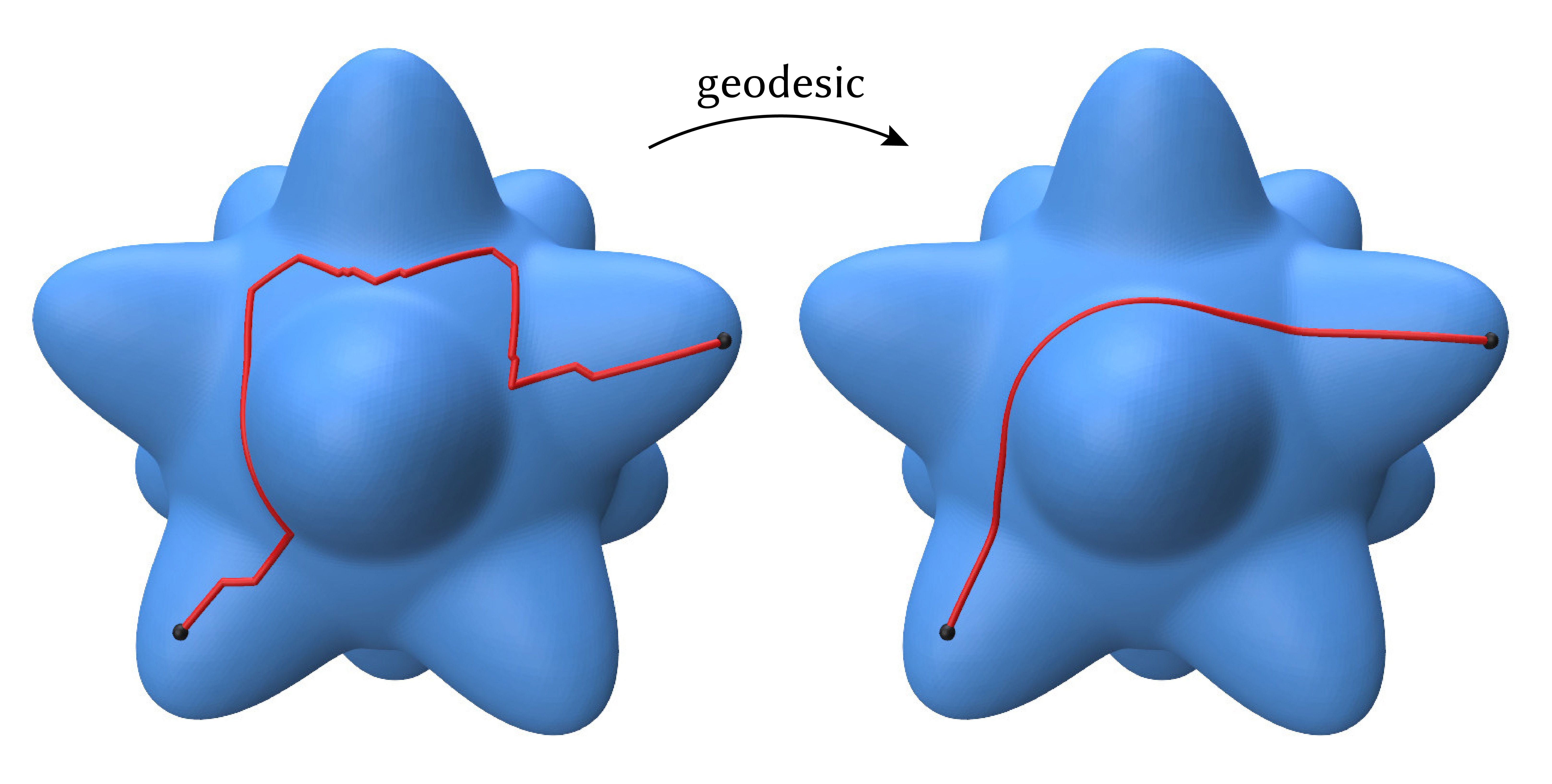 This is an implementation of the algorithm described in You Can Find Geodesic Paths in Triangle Meshes by Just Flipping Edges.

The class stateful class FlipEdgeNetwork encapsulates all functionality in the algorithm; all of the methods below are members functions. This class wraps a SignpostIntrinsicTriangulation (as member FlipEdgeNetwork::tri), and also manages a path network along the edges of that triangulation.

The most direct construct takes as input a sequence of halfedges along the surface which comprise the path.

The key routine is FlipEdgeNetwork::iterativeShorten(), which shortens the path until it is a geodesic by flipping edges in the underlying intrinsic triangulation.

Importantly, after calling iterativeShorten(), the underlying intrinsic triangulation FlipEdgeNetwork::tri is a triangulation which conforms to the generated geodesics. This triangulation can then be used for subsequent computation, such as solving a PDE which has geodesics as boundary conditions.

Once we can shorten curves to geodesics, we can use a de Casteljau-style subdivision scheme to construct geodesic Bézier curves along a mesh, using a procedure described in “Modeling on triangulations with geodesic curves” by Morera et al. (2008).

As noted above, we can additionally generate a triangulation which conforms to geodesic curves, but this triangulation will often contain extremely skinny triangles. Performing Delaunay refinement improves the triangle quality for subsequent computation.

After running iterativeShorten(), the resulting geodesic paths are represented as a collection edges in an updated intrinsic triangulation. The most common operation is to extract the resulting path network as a polyline along the surface. Note that these routines return a double list; the outer list represents the paths/loops in the network, while the inner list are the points in each path/loop.

One option is to get the output as a sequence of surface points, where each is a vertex or a point along some edge in the mesh.

A simpler approach is to simply extract the path as a sequence of points in 3D space.

To use this approach, you must first set your 3D mesh geometry as the posGeom member. This extra step is necessary because in general, the FlipEdgeNetwork can be applied to meshes which have only edge lengths, but extracting 3D points requires your mesh to have 3D positions. (see the example at the top.)

If these routines contribute to academic work, please cite: