The SurfaceMesh is the workhorse data structure for representing surface in geometry-central. Internally, it is reference-based mesh (similar to halfedge mesh), and can hold general polygonal meshes (though many routines only support triangle meshes). SurfaceMesh offers wide support for things like iterating around a mesh, modifying a mesh, and associating data with a mesh via containers. Under the hood, it is implemented with dense, automatically resizing buffers for efficient performance.

There are variants of the surface mesh class; the more general SurfaceMesh which can hold any very general polygonal mesh, and the more specific ManifoldSurfaceMesh, which only supports manifold, oriented meshes.

There are also a small number of operations which might throw an error if called on a ManifoldSurfaceMesh, and should be used only on the more general SurfaceMesh. In particular, mutations which would make the mesh nonmanifold.

Support for general, possibly nonmanifold surface meshes is a recent addition to geometry-central. We are still gradually porting routines from supporting ManifoldSurfaceMesh to the more general SurfaceMesh where appropriate!

The SurfaceMesh also comes with a collection of lightweight types serving as logical references, or “handles” to mesh elements: Vertex, Halfedge, Edge, Corner, Face, and BoundaryLoop (ManifoldSurfaceMesh only). These handles are essentially just a typed wrapper around an ID for the element. Deleting one of these handles does not delete the underlying element, and one may have many distinct handles to the same element Vertex a; Vertex b; a == b;.

Generally, you can (and should) interact with the mesh via higher-level, abstracted routines. However, this section details the low-level relationships between these handles. Note that on a ManifoldSurfaceMesh, the guarantees about these relationships are much stronger than on a more general SurfaceMesh.

The primary type in our halfedge-based mesh is a halfedge, in addition to the usual vertex, edge and face types. A halfedge is a directed edge incident on a face, as shown below.

On a ManifoldSurfaceMesh, two halfedges, oriented in opposite directions, make up each edge in the mesh. Each halfedge has relationships with five adjacent elements: 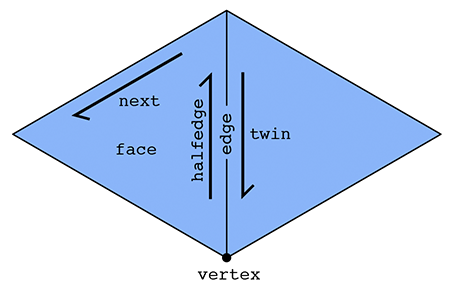 On a more general SurfaceMesh, rather than a single twin, the Halfedge::sibling() referene orbits around all other halfedge incident on the edge, which might point in the same or the opposite direction.

Each vertex, edge, and face need just one relationship:

Manifoldness means that our surface must locally look like a plane in any neighborhood. This disallows structures such as three faces meeting at an edge, or two cones of faces meeting at a single vertex like an hourglass.

These properties are invariants which always hold for the ManifoldSurfaceMesh; in practice we check them during construction and ensure that all operations preserve them.

See the mesh I/O page for helpers which read a mesh from file, and factory methods to construct a mesh and geometry simultaneously.

Remember, all functions from SurfaceMesh can also be called on ManifoldSurfaceMesh.